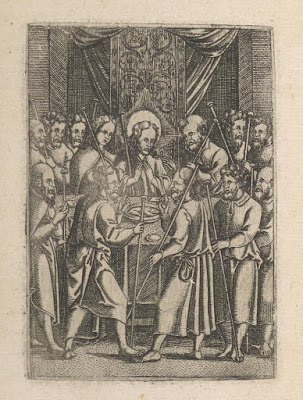 Between April and September of 2020 I posted daily to this blog consecutive chunks of a line-for-line translation of the neo-Latin epic poem Christiad (1535) by the Italian humanist and bishop Marco Girolamo Vida (1485-1566). I started this project not sure if I would complete it (not sure, indeed, if I'd stick with it at all) as a way of giving structure to my days during the Coronavirus lockdown. Just a small, self-appointed task. Others baked bread, or learned a musical instrument. My wife took up embroidery. I did this: translate a small section of Vida's poem daily, and post it to this blog with some appended comments or thoughts. I worked my effects, poetically, with a mix of deca- and hendecasyllabic lines, trying not to become too stiffly or over-regularly iambic pentameterish as I went. A couple of weeks ago, having worked through each of Vida's six 1000-line books in turn, I finished. Here are links to those books:
Book 1.
Book 2.
Book 3.
Book 4.
Book 5.
Book 6.
Both during, and since completing, this entirely self-inflicted task there has been a remarkable, one might even say resounding, silence. Nobody is interested, which is entirely what one would expect where a Renaissance retelling of Christ's story in Vergilian hexameters is concerned. A couple of friends (and by couple I mean precisely that) commented, from time to time, on the occasoinal post; but for most this whole, bizarre undertaking could hardly have been less interesting. That's fair enough. There is such a thing as scholarly Stockholm Syndrome, and though I became increasingly fascinated by and drawn into this poem I can of course see why nobody else is.
It didn't use to be this way, mind you. To quote James Gardner, whose excellent prose version of the poem was my help and walking-stick throughout the process, the Christiad was ‘by far the most popular Christian epic of the Renaissance, appearing in almost forty editions before 1600. It was translated into many languages, including Croatian and Armenian, and was widely imitated by vernacular poets such as Abraham Cowley and John Milton.’ Other critics have said similar things:

Compared with the quasi-Vergilian poems which span the fifteen centuries since Vergil . . . Vida's Christiad is virtually the only attempt at Christian epic that succeeded .... Vida was a giant among the pygmies in his understanding of Vergil's structure and thematic design, in his architectonics, in his transformation of many of the canonical elements, in his sensitive employment of evocative allusion, functional similes, interwoven patterns of imagery, and other devices to embody theme, and in his vast conception nobly executed. The Christiad is a fundamentally Christian epic which manages to remain profoundly true to its classical model. [Mario Di Cesare, Vida’s Christiad and Vergilian Epic (Columbia University Press, 1964), 282]

I found the integral virtues of the poem less evident, to be honest. The bottom line, I think, is that Vida could not find a way, because I'm not sure there is a way, of reconciling his grandly highfalutin, martial and aristocratic mode of Vergilian epic with the radically humble, stylistically plain sublimity of the Gospels: the story of a man whose ethos was set wholly against the notion that a person's worth depended on the elevation of their birth or the accumulation of their martial and worldly glory. This remains an awkward mismatch throughout, and within it are folded a number of other distortions, most notably Vida's decision (perhaps understandable for an Italian and an inhabitant of Rome) to go as far as he could to acquit Pontius Pilate of any actual wrongdoing in ordering Christ's crucifixion. Not that this rigidly hierarchical vision, which extends in the poem beyond Earth and into an elaborately stratified and ormulu heaven, doesn't provide us with a variety of often gloriously kitsch pleasures.
For me, though, the most interesting aspects of this mammoth undertaking lay elsewhere. For one thing it sent me back to Milton's Paradise Lost, which I re-read with pleasure and, indeed, astonishment. Scholars have long known that Milton read, and was influenced by, Vida's epic, although I'm not sure it's quite been registered just to what degree this was true: from Englishing specific images and descriptions out of Vida's Latin, to a larger sense in which Protestant Milton attacks the (as he saw it) problematics of Catholic Vida's epic de facto justification of the ways of God to man. I wrote about this latter, at some length, in this post, actually.
The other thing undertaking this task did was brought me a lot closer to the story the poem is telling: not only re-reading the Gospels (something I hadn't done in a long time, actually) but chasing down scholarship on various matters—it's remarkable what a wealth of often amazing essays and reviews on these matters can be accessed through JSTOR—and pondering my own personal relationship to it all. Again, I wrote about this topic, at length, in this blog-post.
Indeed: it's a strange thing, or it seems strange to me, how exposed I felt after posting the blog linked-to in that last link. I'm not sure why: nobody cares, I'm very well aware, and there's nothing in the blogpost that would in any conventional sense be thought shaming or exposing. But there you go: I don't much go in for the confessional mode, and though the stuff I talk about surely wouldn't strike the average reader as especially intimate or revealing, it felt that way to me. On the other hand, and as I noted at the start of this post, nobody reads this blog anyway. So my secret, as the phrase goes, is safe.
At the head of this post: an engraving of Christ breaking bread with his disciples from a late-16th-century untitled book currently in the Free Library of Philadelphia [Lewis E 179, fols. 46v–47r]. The online catalogue calls it an ‘Album of Engravings and Devotional Texts by Erasmus, Marco Girolamo Vida, and Prudentius’. It is

a modest book of 109 paper folios written in a non-professional, Northern European humanist hand, adorned with forty-five engravings illustrating the Life of Christ from the Annunciation through to the Last Judgment. The distinctive watermark visible on some of the book’s pages (with the help of transmitted light) was employed only in the 1550s and 1560s, in the Netherlands and Northeastern France.

Fascinating little volume, and one that contains lots of Vida. Enough! Or too much?
Posted by Adam Roberts at 00:41 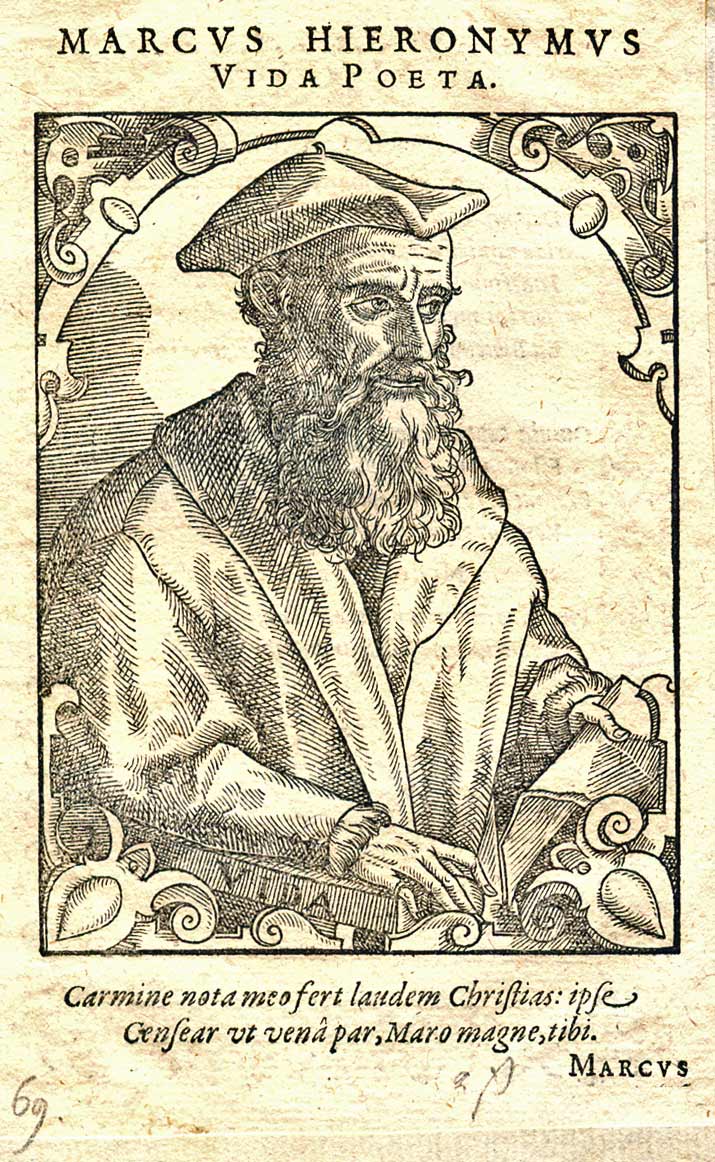 This blog is a Coronavirus lockdown project, to keep me busy, and my idle hands from mischief. I am translating Vida's six book 16th-century Latin epic poem, the Christiad (1535) line by line. For more on this poem, and on James Gardner's impressive prose rendering (to which my version is indebted), go here.
To start at the beginning, go here.

Adam Roberts
One of the most june men in all the Russias.